Best cycling routes in the Dordogne

Cycling in the Dordogne is a unique experience : quiet country roads linking honey coloured stone villages, spectacular scenery, clean rivers, vineyards, forests of oak & chestnut. As well as the natural beauty, cycling through this region is a journey back in time : medieval market towns & villages, renaissance and medieval castles, 13th century bastides, 12th century churches, troglodytic sites and prehistory sites with cave art.
At Aquitaine Bike, we have 28 years of personal cycling experience in the Dordogne. We have designed numerous world class rides throughout the region, for all levels of riding, taking in the best cycling routes and points of interest.
These routes feature on our various self guided Dordogne cycling tour options : Classic tour,  Wild Boar tour, Two Rivers tour,  4 Day tours.
For our Dordogne bike tours, we incorporate a blend of loop rides, and point to point rides, which offer maximum flexibility in terms of options & distance.

Grotte de Rouffignac –  Rouffignac Cave has the most extensive cave system of the Périgord with more than 8 kilometers of underground passage ways. It contains over 250 engravings and cave paintings and drawings of horses, ibex, rhinoceroses, bison, and a great number of mammoths, including the “Patriarch” dating back to the Upper Paleolithic. 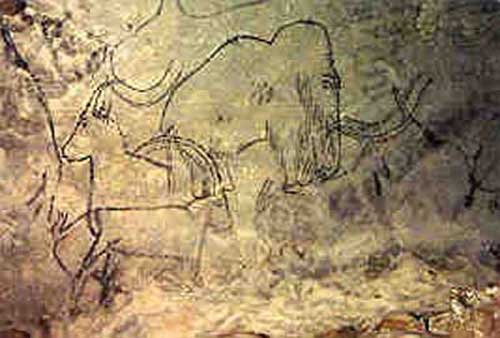 The rock art of Rouffignac is 13,000 – 14,000 years old, from the Magdalenian culture. The painted and engraved drawings are distributed in most of the galleries of the upper floor, but their density varies across sectors. Today, the public visiting areas are where their concentration is greatest. Two methods were used by the Magdalenian artists to adorn the walls, according to the rock texture. For the drawings, pieces of manganese dioxide were used, forming black figures on the clear rock. For the engravings, they have used flint chisels, bone or wood tools. If the rock was soft, they simply used their fingers. Several species of bears have occupied the cave of Rouffignac prior to human activity – they left three types of visible traces: vertical streaks of bear scratches on the walls, hollows for hibernation on the floors, and fossil bones.

Visits in Rouffignac cave by the public began in 1959. Today, visitors are taken on an electric train through the subterranean labyrinth for a one hour tour. Such an installation makes the site accessible to all, but more importantly provides an essential asset for the preservation of the art; numbers are controlled, as is the lighting. 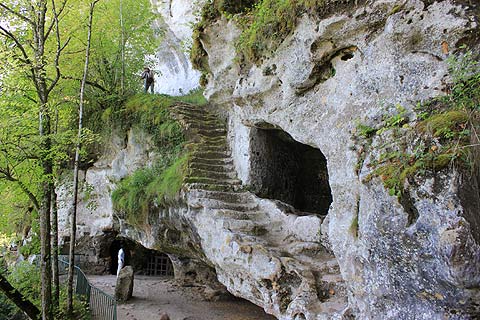 1km long and 80 metres high, La Roque St.Christophe is the largest troglodytic site in Europe – the limestone cliff is pierced with 100 rock shelters over 5 levels. Humans began occupying the site as early as 55,000 years ago, at the base of the immense limestone wall. The natural cavities of the cliff face were occupied in prehistoric times, then modified to become a medieval fortress city, until the beginning of the renaissance.The tour will enable you to understand the configuration of troglodyte dwellings : kitchens, sleeping areas, places of worship, as well as a museum of ingenious civil engineering machines, reconstructed to pay tribute to the great medieval builders.

Open all year round, every day for unguided visits:
February, March and from October to 11 November : 10am – 6pm.
April, May, June, September : 10am – 6.30pm
July, August : 10am – 8pm
12 November to 31 January: 2pm – 5pm
Last admission 45 minutes before closing time.
Bookstore / Gift shop open all year round.
Snack Bar open from April to September.
www.roque-st-christophe.com/ 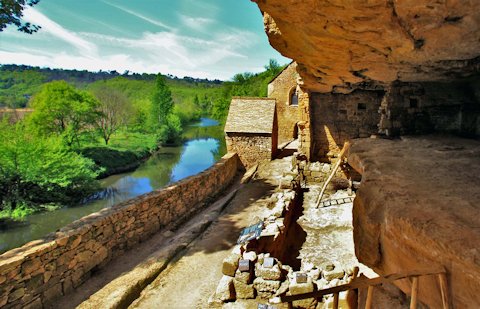 This exceptional and natural site is amongst the best-preserved in the Vézère valley,and has attracted mankind from prehistory to nowadays. At the foot of the cliff, 17000 years ago, semi-nomadic hunters-gatherers settled. The prehistoric deposits found here characterised the Magdalenian culture, and the site  gave its name to this period of Prehistory: The Magdalenian.

In 1863, two “archaeologists” Edouard LARTET and Henry CHRISTY, whilst prospecting in the Vézère valley, discovered a vast under rock shelter on the left bank of the river.  Numerous excavations followed, revealing an abundance of tools (harpoon tips, chisels, blades etc) and a number of engraved objects, amongst which are a mammoth on an ivory plaque and a bison on the antler of a reindeer. They also found bracelets, pendants and necklaces – the earliest portable jewellery was discovered here.

Halfway up the cliff, carved into the face, there is a troglodytic medieval village – it has been inhabited from the Middle Ages until the end of the19th century. Amidst the buildings is a remarkable 15th century gothic chapel, hanging from the cliff.
Still standing at the top of the cliff, are the vestiges of the Chateau de Petit Marzac, built during the 13th century. 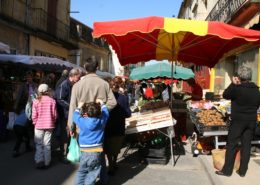 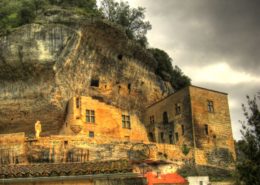